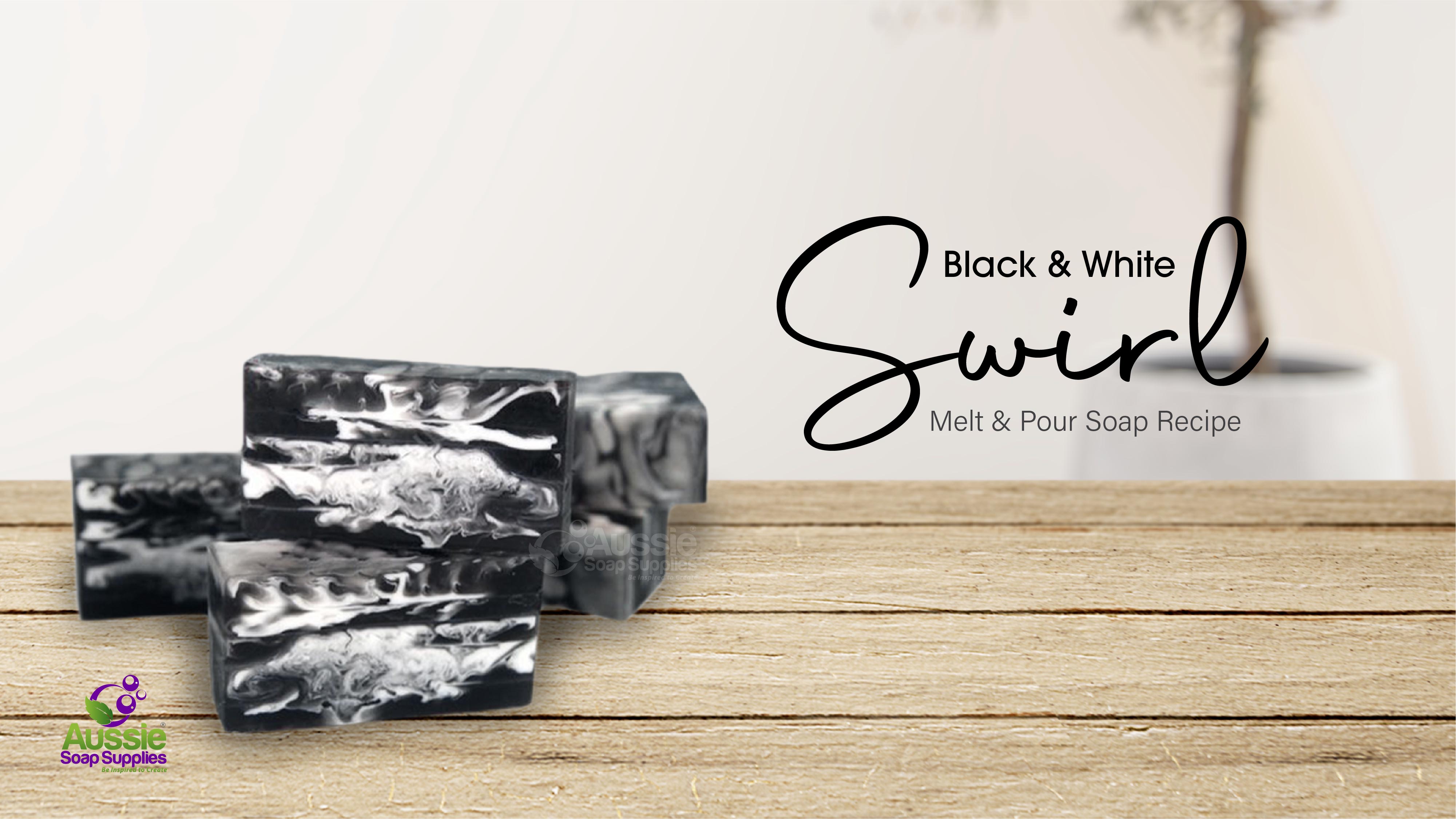 Swirled Melt and Pour Soap can be a little tricky, but it's not really, just take note of the temperature of both colours and make it in layers.  If it starts to set up, just remelt!  There is no specific temperature required, but both colours need to be pretty much the same.  If you have a thermometer I like to work around 60 - 65°C - but this can vary a little from base to base.

Dice the Clear and the White Melt and Pour Soap into cubes and place in two separate jugs.
Melt in the microwave in short bursts until liquid (if using a thermometer keep the temperature at around 60 - 65°C). 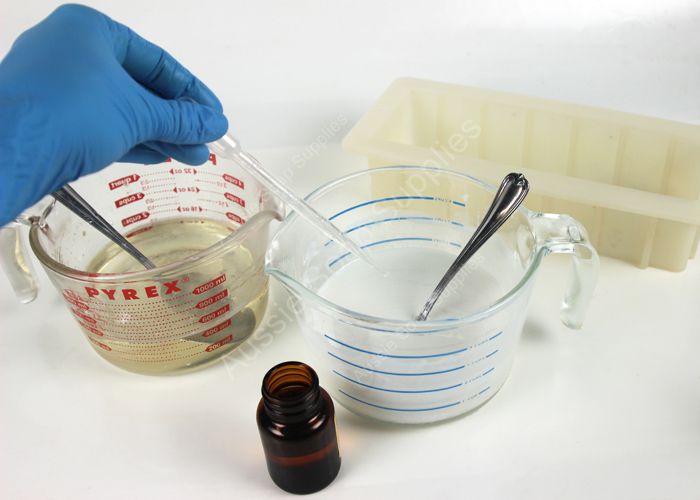 Add 10ml (2 teaspoons) Black Currant and Pomegranate Fragrance to each jug and stir well to combine. 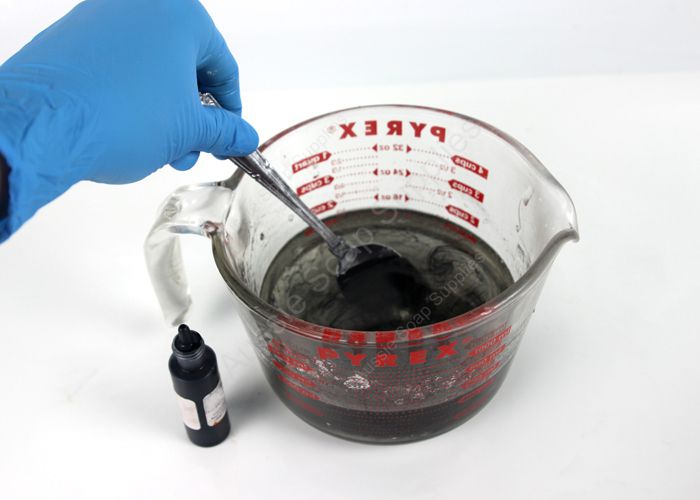 Add sufficient Black Liquid Dispersion to the clear soap until you see the soap has a nice opacity and depth of "blackness". 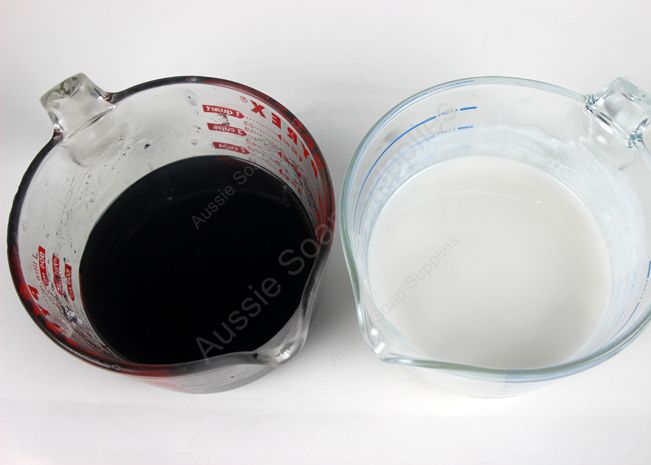 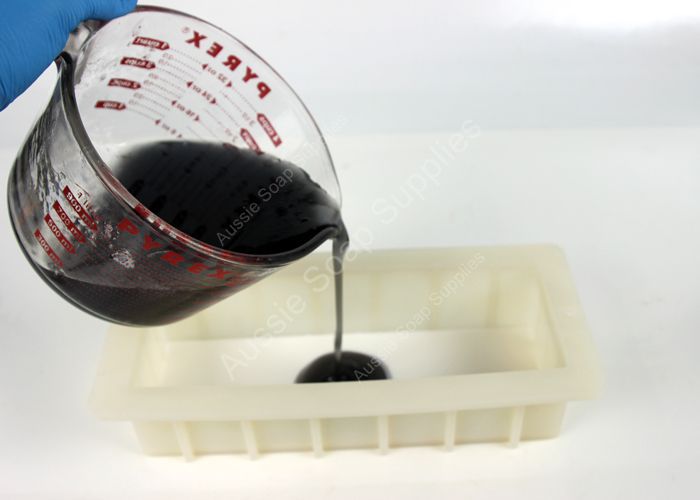 Pour approximately 1 cm of black coloured soap into the loaf mould, spritz with alcohol.
Leave this layer to harden up until a tough skin has formed (approximately 10 minutes depending on how hot you have poured).
Spray the surface of the black layer with Isopropyl Alcohol.
Cover the jug of soap with some plastic film, and pop it back in the microwave just to keep it warm.
Spray the surface of the black layer again with Isopropyl Alcohol.
Now pour over a white layer in an "S" shape, spray, then take the chopstick, and stir the white soap through the black, a little haphazardly.  This is just enough to achieve the effect as shown.  It can help if you break a little hole in several places if it has set up a little too much. 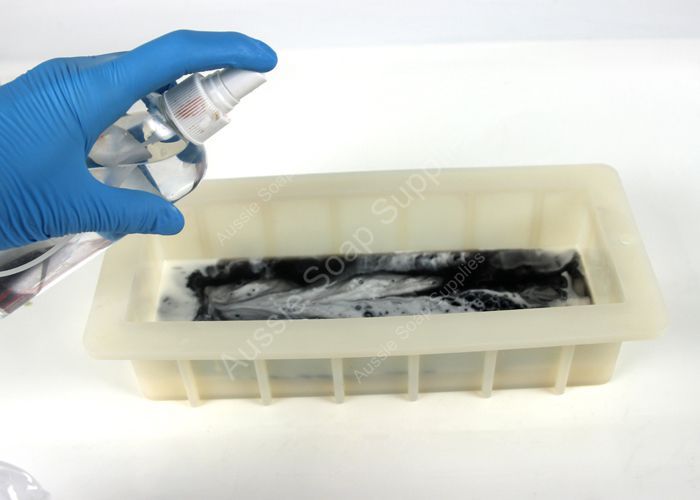 Spray with alcohol again.
Cover the jug of white soap with some plastic film, and pop it back in the microwave just to keep it warm.
Allow swirled soap in the mould to firm up again as previously - you may need to re-melt the soap just before pouring each new layer.
Repeat this process of spraying, layering and swirling until you have used all the soap.
Allow to set up completely before slicing - preferably overnight.
Slice and wrap as usual! 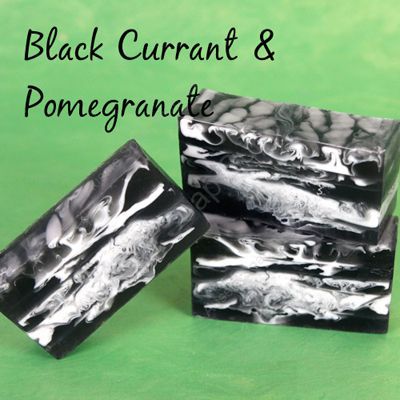 After colour testing for a couple of months we had lots of bars of test soaps that were begging for use, so it was time to re-purpose and upcycle them…
Learn More

This project is a great one if you are a beginner, have some experience and are in a hurry, or simply want to make some eye catching, exfoliating soap…
Learn More

Many years ago (way back around 2002), I used to make my Peach Pie and Lemon Meringue Pie soap Frosting with White Melt & Pour Base and so…
Learn More

This is a quick and easy, very effective feminine spa Soap DIY.  It is great for Mothers Day, Valentine's Day or just for when you are 'feeling a…
Learn More

Info-tutorial: This original project was made by Soapy Love a long while ago, but credit is still due!  This has now been reproduced here …
Learn More

This beautifully scented soap is swirled in the mould, which is trickier with Melt & Pour Soap than with Cold Processed Soap as the temperature is…
Learn More

Our Melt and Pour Goats Milk Soap is as smooth as silk - luscious and creamy.   Goats milk has wonderful skin softening and nourishing quali…
Learn More

Soothing and moisturising, this Triple Butter Melt & Pour Soap has Aloe Vera and Vitamin E added to the base.   The colour pattern is re…
Learn More

Our Wooden Loaf Mould is supplied with a Budget-Wise Silicone Liner and holds a handy sized 1400g batch of Cold Process Soap or Melt and Pour Soap.&nb…
Learn More