This project is just for fun - serious soapy fun!  The day I decided to make this soap I had no electricity so I considered this from a recipe perspective (measured by volume) instead of a formula (in percentages with everything weighed).  Admittedly I had wait for the power to come back on to melt my soap and whip it, but all the planning, prep and thinking was done.  As I had no scales and only my brain to calculate proportions I had made this as a “recipe” instead of a formula using cup measurements.

All this said, I am a bit of stickler when trying to repeat formulations or increase the batch size but avoid the margin of error – so I returned to “best practice” and measured everything by weight when I had the power restored!

NOTE:  This soap took 4 batches to perfect, and I could not get a good, firm, fluffed soap with any clear soap I used, including our Palm Free Neutral.  I have only managed to make this successfully with the Palm Free Goatsmilk Melt and Pour Soap.  So though it may work with other bases, I have not experimented other than my 3 failures! 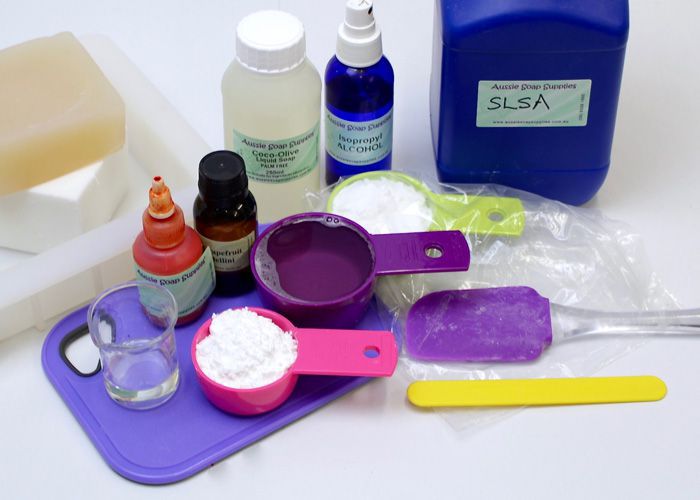 If the SLSA and Cream of Tartar have any lumps, and you don’t have or don’t want to push the powder through the sieve creating dust, measure them and place it into a Ziplock bag, seal the zip ensuring there is no air in the bag (this avoids creating a pillow effect) and gently massage out the lumps with the back of a spatula or mixing spoon on the bench top until it is fine a powdery with no lumps.  Then it’s ready to use in the formula. 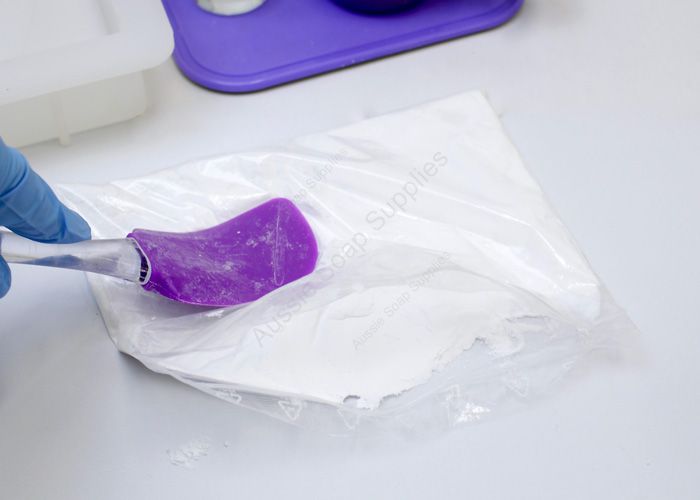 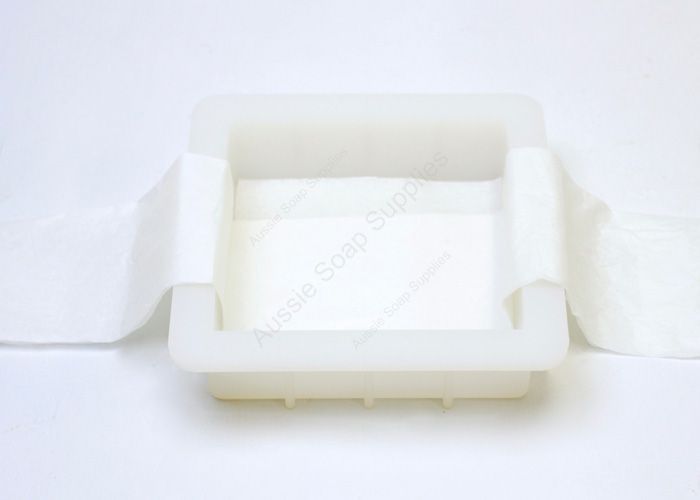 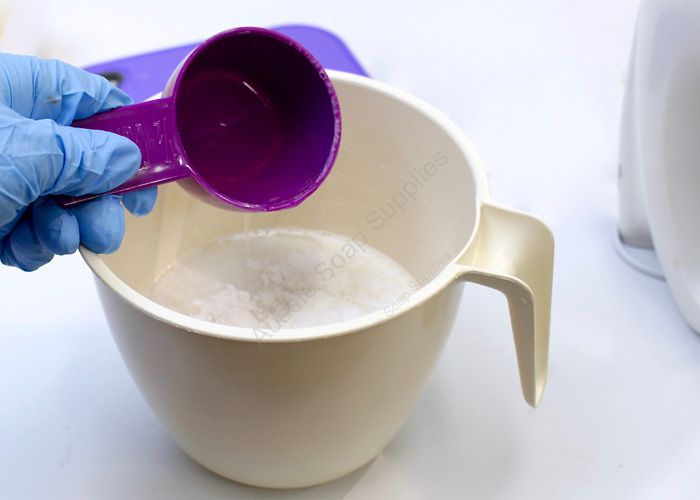 Dice the soap base and melt in a jug in the microwave.
Add the melted soap to your bowl along with liquid soap, all the colorant, 1/2 the fragrance, 1/2 the cream of tartar, and the SLSA.
Melt the diced soap base in the microwave until melted (around 75°C).

Measure and sieve the powders  into the other jug.
Add the powders and Coco-Olive Liquid Soap into the jug with the base. 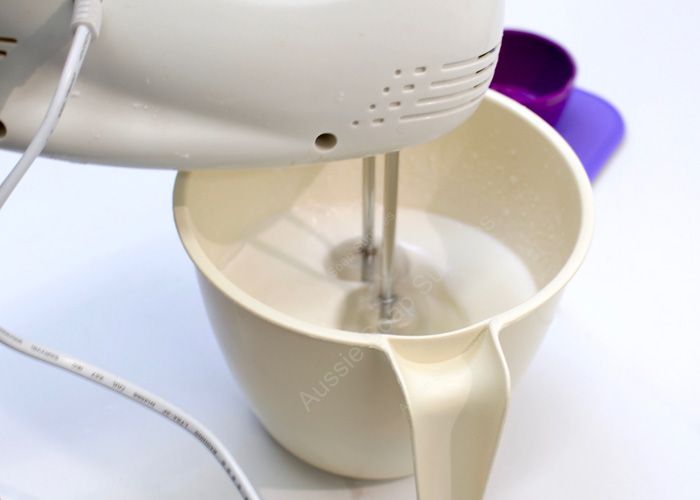 Begin whisking this mixture, as it begins to thicken and the volume increases, add the fragrance (to your preference).
and the Citrus Orange Colour.  I used about 10 drops of liquid colour, so adjust the tone to suit your taste. 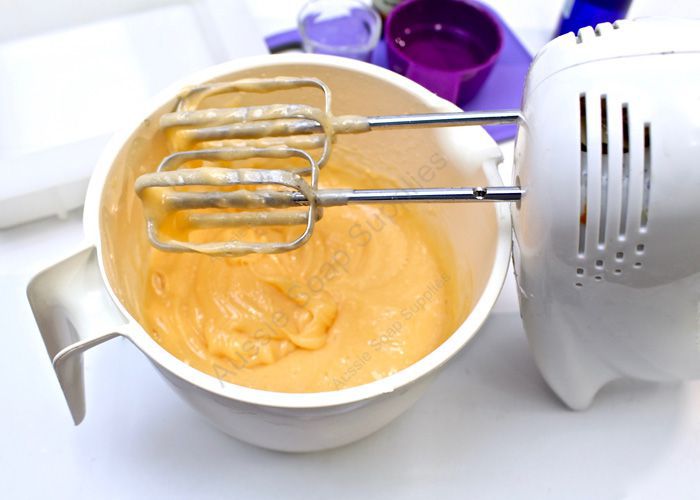 You'll notice the colour will lighten as you whip the soap.
If the soap begins to set up during this process, give it a short blast in the
microwave and begin beating again. 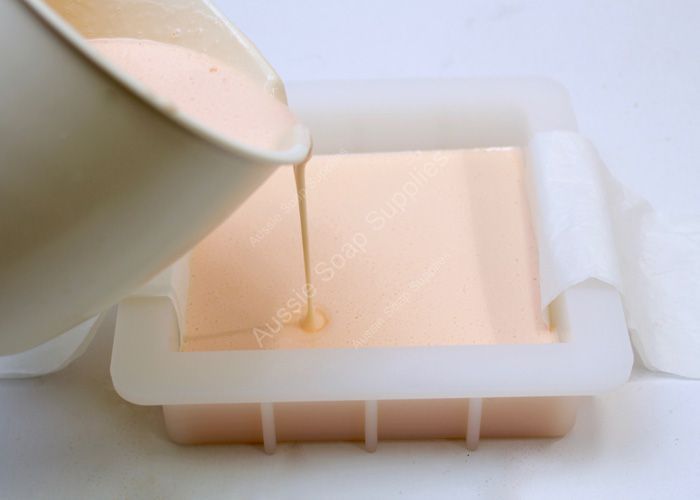 You'll find it is suddenly ready to pour, for me this was at 69°C.
Pour swifly into the mould and then tap down immediately to release any trapped air. 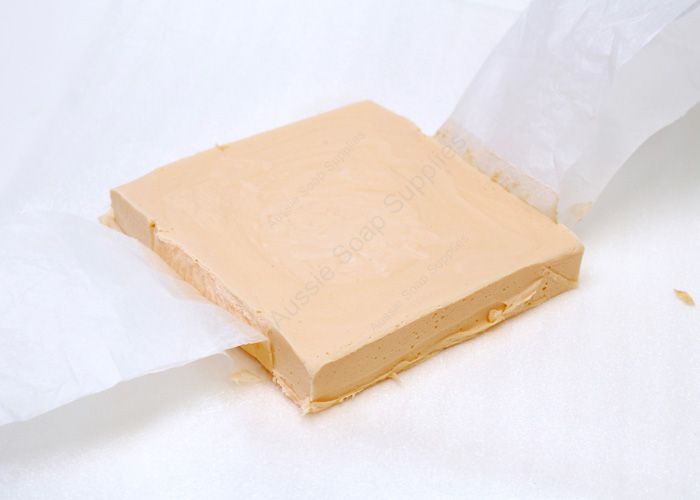 Allow to set up for several hours or overnight.  If leaving overnight cover to avoid night time moisture.
To remove the soap from the mould firstly slide the knife around the edges of the vertical sides.
TAKE CARE - do not use a sharp knife with downward pressure of you will cut into your mould!
Then lift the soap out of the mould using the "handles" of paper. 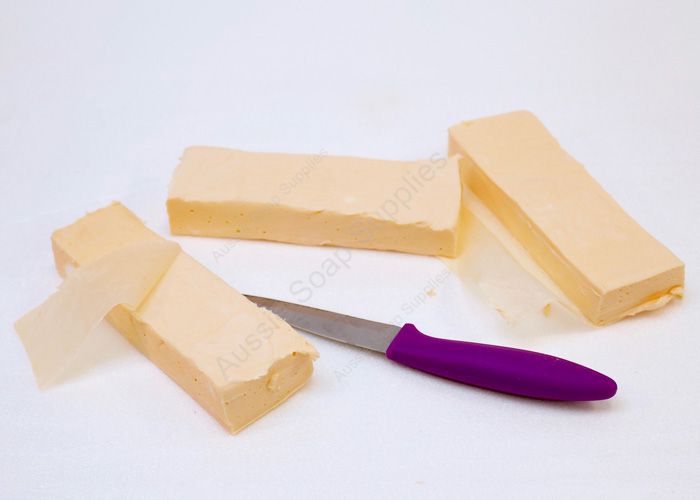 Use a short bladed knife to cut into 9 squares. 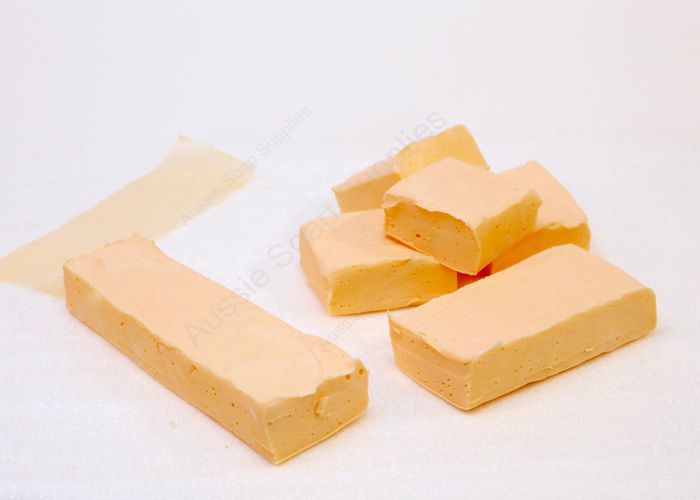 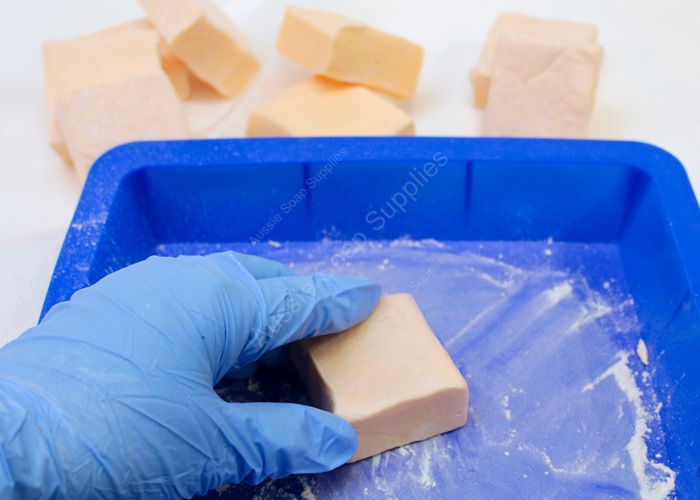 I like to use gloves for handling the soap when coating them.
Place the Sericite, white clay or cornflour into the spare tray and take the first bar and roll all surfaces into the powder,
ensuring it is well coated on all faces. 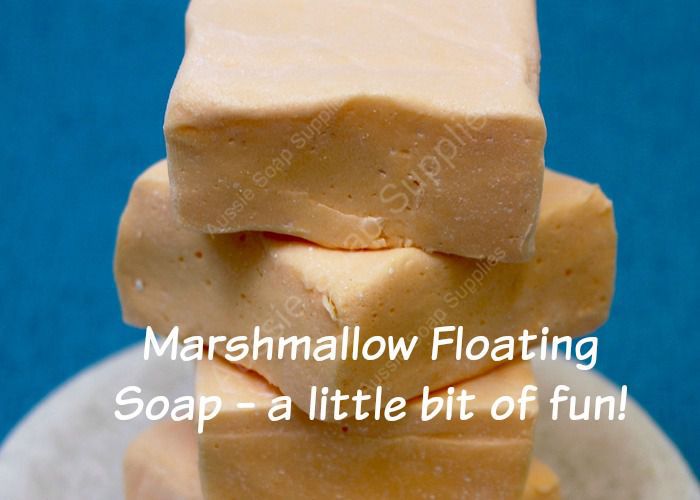 Oh, did I mention that it floats?  This really is a fun soap, it is soft and squishy, it floats, and kids love it, but it's not something I would
use on a nightly basis, but is just a fun project!

The first graphic shows Isopropyl Alcohol, but I found it was not required, so this is not included in the "Add to Trolley" ingredients bundle.

Marshmallow flavour is a subtly syrupy flavour with just a touch of vanilla sugar.Usage amount:  Use at 1 to 4% of the total weight of lip balm o…
Learn More

When I sliced this log, I loved the Retro-Groovy design that was revealed as it is just a little bit sixties! This fresh, Avocado and Castor Oil Cold …
Learn More

This stamp has tells your customers very clearly that your soap is good and natural!Soap Stamps are an easy way to personalise your soap,  Acryli…
Learn More

This stamp has tells your customers very clearly that your soap is good and natural!Soap Stamps are an easy way to personalise your soap,  Acryli…
Learn More

Jazz up your Bath Bombs with our fun and festive Bath Bomb Sprinkles! A light sprinkle in the base of a bath bomb mould will give a lovely layer on th…
Learn More

If you feel you have graduated from our basic Three Bubble Bar recipes, which we formulated, a good long time ago, it might be time to step up to this…
Learn More

Our Shower Steamer Tablets are easy to make and do the job!  You can purchase a Pure Esential Oil Blend on this page, or you might like to…
Learn More

Note:  Some colours and scents are now deleted.  The video tutorial still has the original names.The sun is shining, and December is looming…
Learn More

The Back Story:  About 12 years go I experimented with making a bath soap jelly - the recipe is HERE - using carrageenan, which is a vegan friend…
Learn More

This is a wonderful smooth creamy soap with a butter-like consistency, that lathers beautifully, and can still have all your favourite colours, fragra…
Learn More

What is a Blooming Bath Oil?  Blooming bath oils differ from ordinary bath oils in that they disperse INTO the water, rather than floating…
Learn More

Natrasorb Bath *Due around June due to COVID delays*

This is a totally natural starch product that is so useful as a fragrance carrier......Natrasorb Bath is able to absorb and carry large quantities of …
Learn More

I like to use fun and fruity fragrances in jelly soap.  I use a small blade knife to dice the base, which is quite effective, but I change to sci…
Learn More

Soothe and Nourish your whole body!If you want to get back to basics, there is nothing like the benefits of natural oats and Goatsmilk when you want t…
Learn More