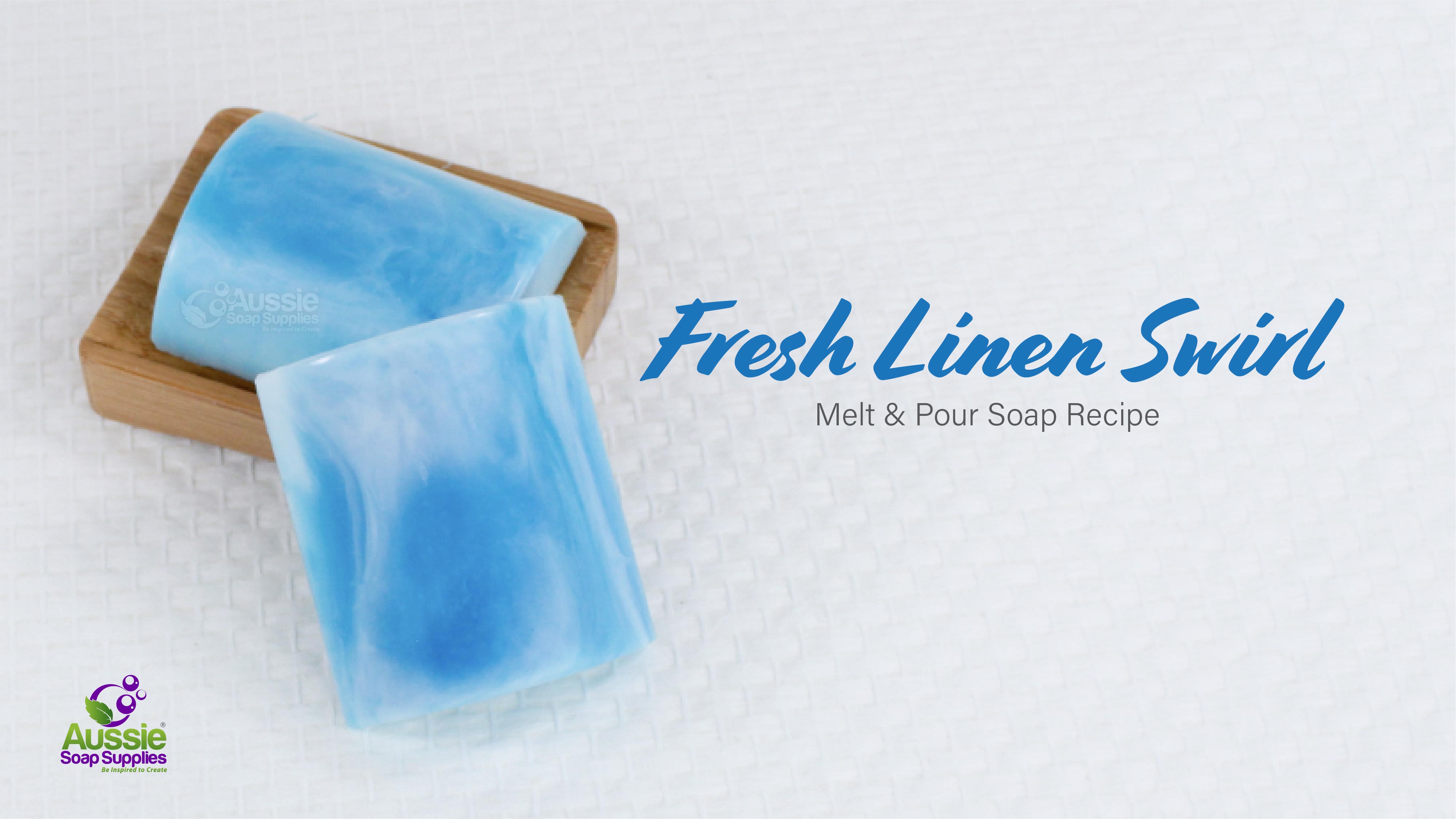 Our Palm Free Melt & Pour Soap Base is probably the easiest MP Soap Base to swirl we have ever used, so I have been stuck in a bit of a swirling groove during our trials with this new base.  I'm planning new non-swirled projects next though!

I still love swirling this base, so here is a beginner ITJ pictorial tute (well, if it was Cold Process Soap it would be "In the Pot", but as it's Melt and Pour Soap it's in the Jug!), featuriing the lovely Fresh Linen Fragrance.  We actually made two colours, the yellow and the blue one, so if using "Add to trolley button" and you only want to make one coloured soap, just remove the other colour from your trolley.  If you are making two different coloured pours, just divide the fragrance and soap base into two batches.

Our Palm Free Soap range have a higher melt and set up temperature, so bear this in mind as you craft this base, it's best poured at 65 - 70°C.
To make SIX soaps of one colour range (ie blue and white) use the ingredients below.

Dice and weigh soap bases into separate jugs and then melt the first two jugs - one Goatsmilk (or White) and one Crystal RC.
Check the temperature - both should be around 65°C. 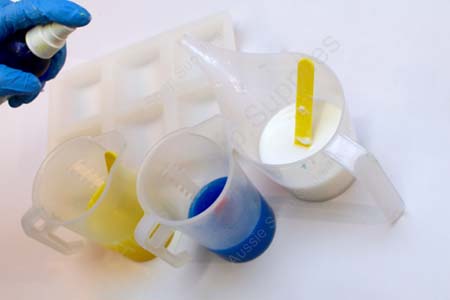 Add colours to both the jugs of clear soap (shave the blue colour block to make it easier to melt, you'll probably only use half the block).
Add 8g/ml fragrance to each jug (you can use less if you for a more lightly scented soap). 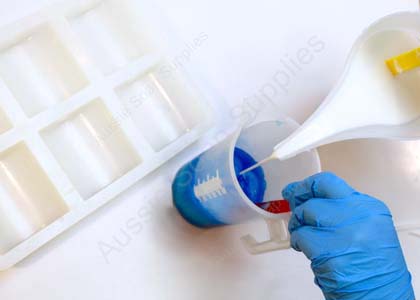 Carefully add half of the Goatsmilk white soap base into the blue colour soap.  DO NOT STIR. 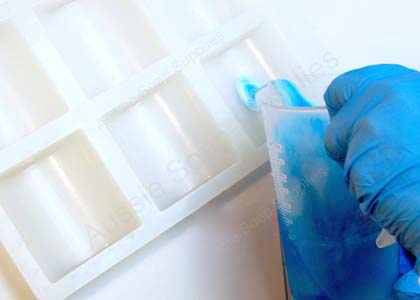 Now slowly pour soap into the first cavity, allowing the soap to swirl in the mould as you pour. 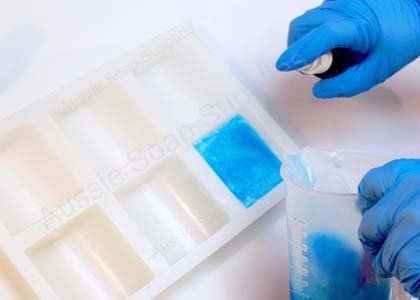 Spray the surface of soap with Isopropyl Alcohol to remove any surface bubbles. 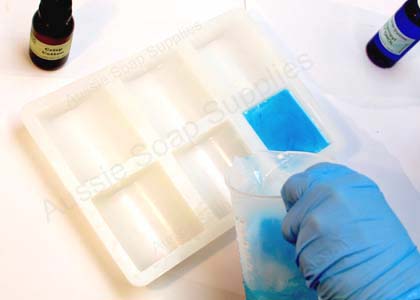 Repeat for the other two cavitites. 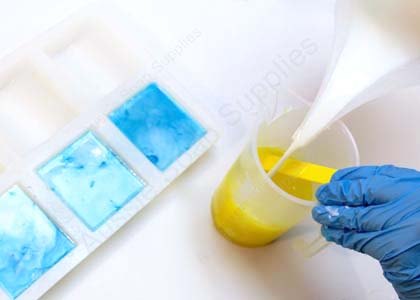 Now repeat this process for the yellow soap and the remainder of the white soap.
If the soap has become too thick, 5 or 10 seconds in the microwave will re-melt. 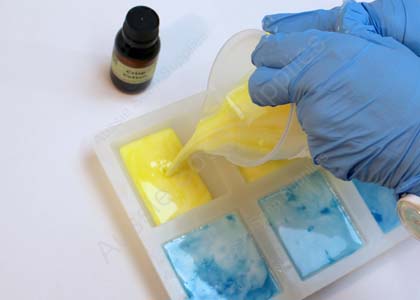 Use the same process as previously. 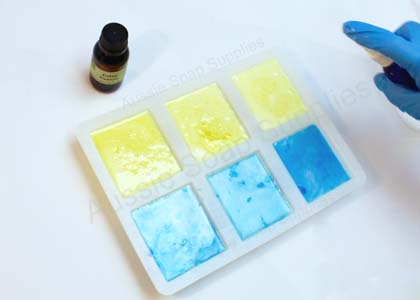 Spritz with Isopropyl Alcohol again and allow to set up completely - usually for several hours.
Unmould and then wrap soap as usual.

If using "Add to trolley button" and you only want to make one coloured soap, just remove the other colour from your trolley.  Also, the trolley contains 2kg of soap base, which will make 2+ batches of this recipe (16 bars of soap)

If you have a query about Melt and Pour Soap please read on …. the answer is probably here! Frequently Asked Questions about Melt & Pour So…
Learn More

With this Melt & Pour Kit you can select different Melt & Pour Soap Bases, even Palm Free - select your preferred soap base from the dropdown …
Learn More

Spoil yourself or someone you care about with our SFIC Brand Goatsmilk Melt & Pour Soap Kit which makes 10+ Bars of gentle moisturising soap. You …
Learn More

Just in time for the holidays, make your Christmas-shaped soaps for Christmas gifts or for a fun and festive school holiday activity! This kit makes a…
Learn More

These delicious Chrysanthmum Soaps are quick and easy to create, and make perfect gifts.  I have added a little sparkle on top and used two diffe…
Learn More

Soothing and moisturising, this Triple Butter Melt & Pour Soap has Aloe Vera and Vitamin E added to the base.   The colour pattern is re…
Learn More

This is a pumped up but simple uncoloured, Melt and Pour Soap which is suitable for little ones as well as grown ups who want a gentle, cleansing natu…
Learn More

This is a quick and easy, very effective feminine spa Soap DIY.  It is great for Mothers Day, Valentine's Day or just for when you are 'feeling a…
Learn More

If you have a query about Melt and Pour Soap please read on …. the answer is probably here! Frequently Asked Questions about Melt & Pour So…
Learn More

Swirled Melt and Pour Soap can be a little tricky, but it's not really, just take note of the temperature of both colours and make it in layers. …
Learn More

I've been on a bit of a nostalgic soapy thing lately, old ideas brought up to date, and this one has been around a while, but deserves to be aired aga…
Learn More

This beautifully scented soap is swirled in the mould, which is trickier with Melt & Pour Soap than with Cold Processed Soap as the temperature is…
Learn More

Our Shea Butter Soap Base is white in colour and has 5% naturally crushed Shea Butter added during saponification. ( Our base has not been re-melted a…
Learn More