Make your own fizzy Bath Bombs with fun, coloured embeds! These Bath Bombs were made by our team of total beginners on a staff training day!

The little coloured embeds are made first, and placed in the mould before packing the uncoloured bath bomb mixture into the mould. The embeds are made from a slightly different recipe to the bombs, but they are still really easy to make with a little care.

As you gain experience in crafting hand made Bath Bombs, you will learn to judge when they are ready to mould, with just enough moisture in the mixture without it being too wet or activating. A useful tip is that when the temperature begins to drop suddenly (you can feel this through thin gloves), you do not add any more moisture.

Ingredients needed to make both the Embeds and the Bath Bombs:

Instructions For the Embeds:
(Note: the graphics are showing the larger batch of embed mixture I make, there are plenty of embeds with the 200g batch you are making. 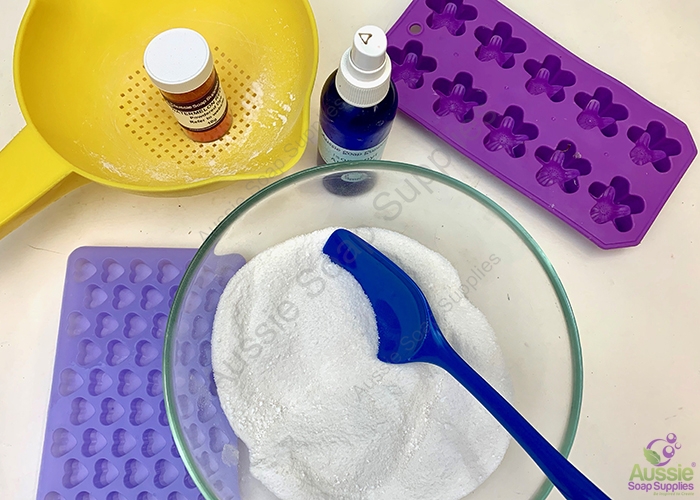 Embeds One: Place a sieve over a large bowl and add the Bicarbonate of Soda, Citric Acid, and Cream Of Tartar and carefully push through the sieve into a large mixing bowl or jug. This is to eliminate any lumps. 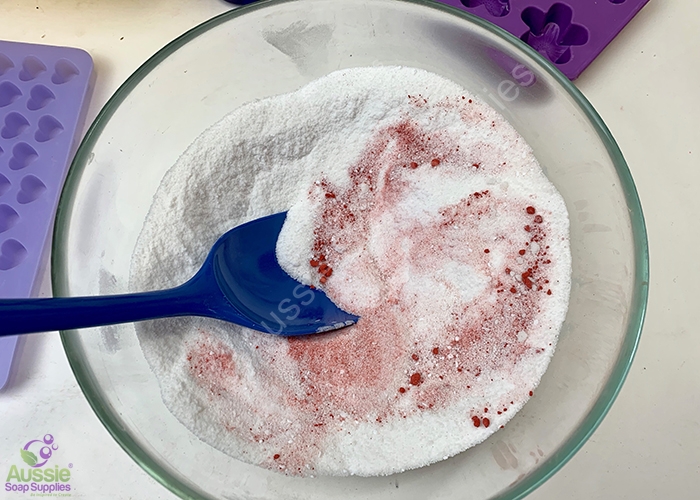 Embeds Two: Add the Watermelon Red Powdered Lake and mix well through the mixture, again ensure all small lumps of dye are broken up into powder. 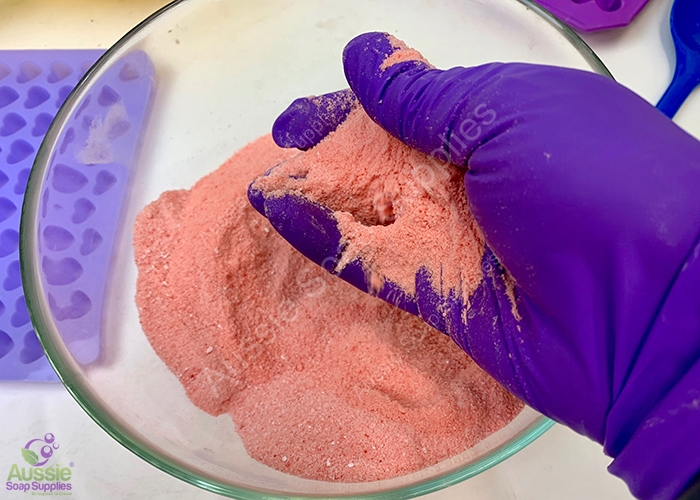 Embeds Three: Begin to moisten the mixture by adding and mixing in your chosen fixed oil and spraying with either Isopropyl Alcohol or Witch Hazel. 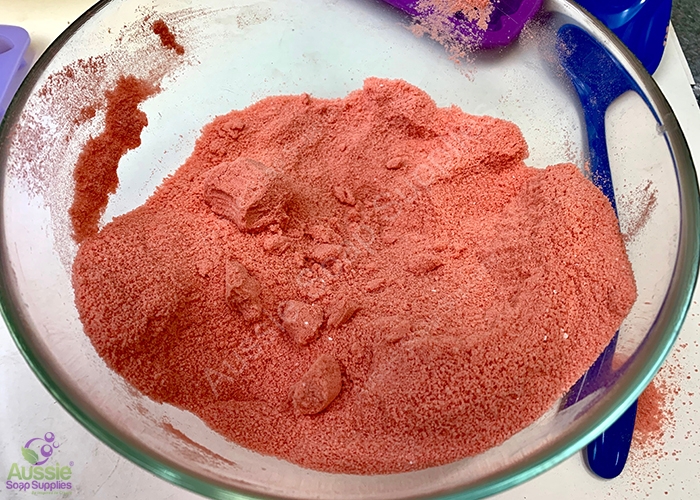 Embeds Four: You can see the more moist the mix becomes, the darker it looks, this is normal. Once the mixture holds together in your hand, and looks like damp sand, it is ready to mould. 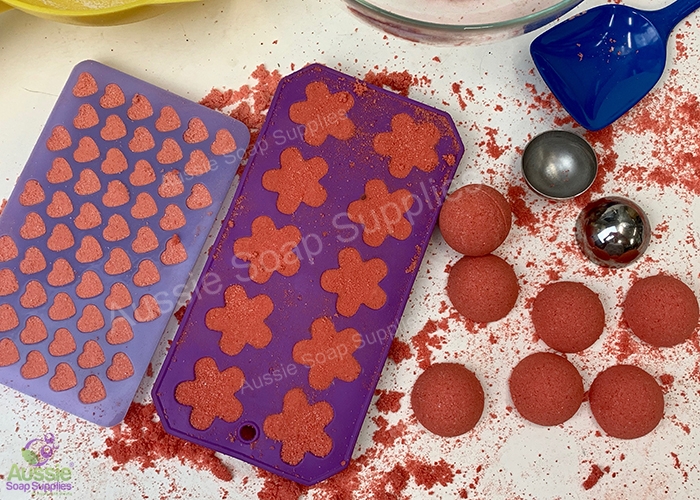 Embeds Five: As these are not the 'main event' you can have them a little more moist than you would for the main bath bomb mixture.  Spoon the mixture into the moulds, and press it down into the mould cavities. Allow to sit for an hour or overnight, to allow them to dry out and firm up. 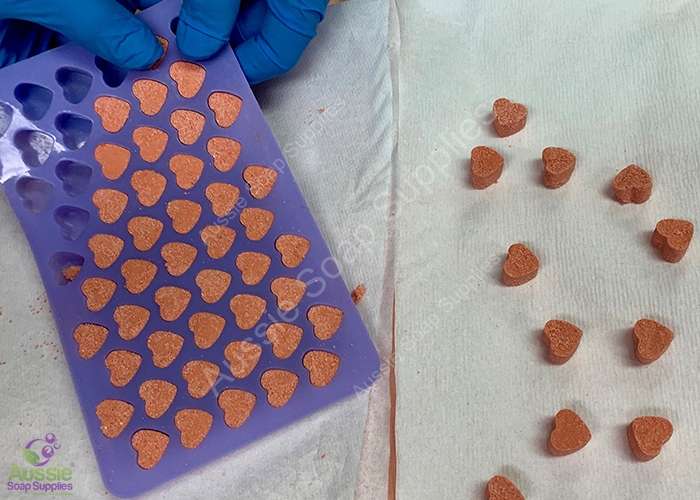 Embeds Six: Unmould all the embeds ready for the main batch. 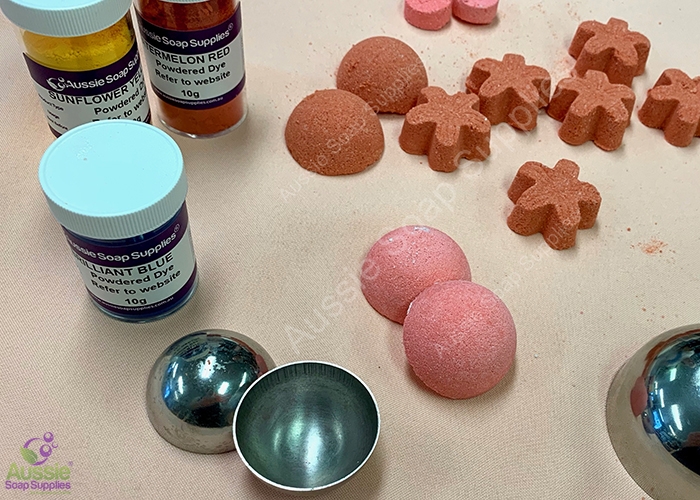 Instructions For the Bath Bombs:

For the main Bath Bomb mixture, use the rest of the Bicarbonate of Soda and Citric Acid. As an option, you can add up to 50–100g Cream of Tartar or Kaolin Clay which helps to make a harder Bath Bomb. 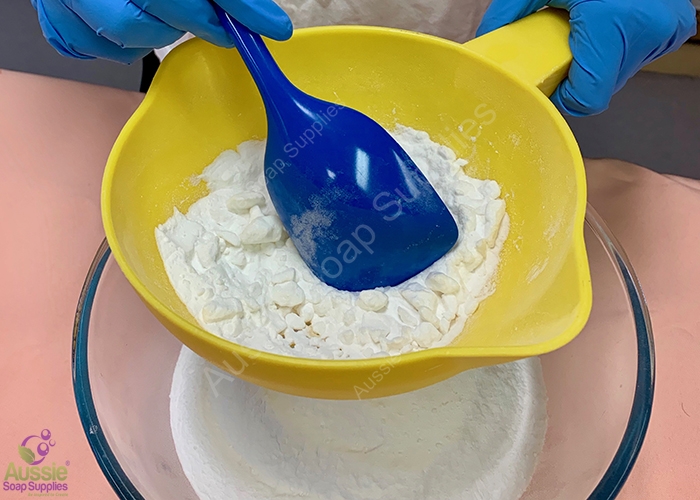 Bath Bombs One:  As previously, sieve the mixture to remove any lumps. 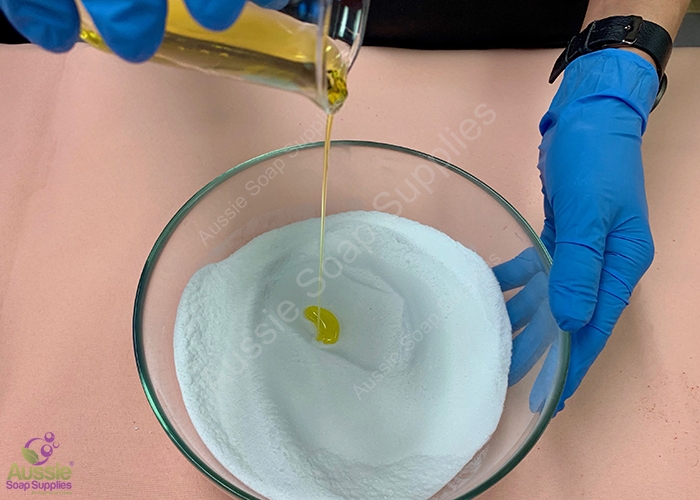 Bath Bombs Two:  Combine the remaining Almond Oil, Polysorbate 80 and the Essential Oil Blend or fragrance. Slowly pour in the liquid mixture, mixing it in as you go.  You can use a balloon whisk, or your fingers to combine the oils and powders. 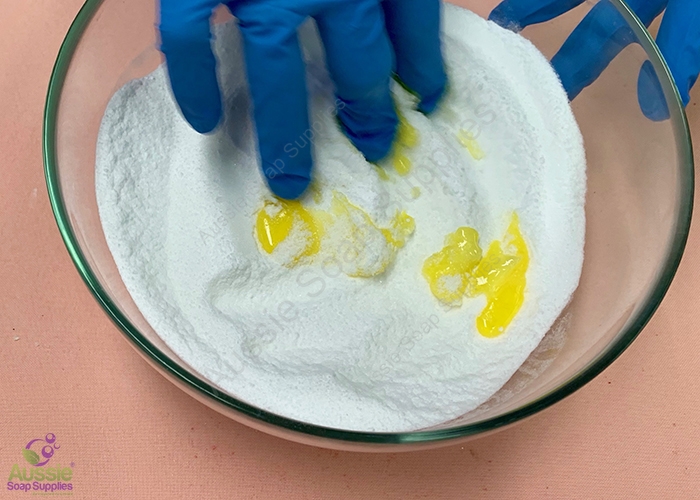 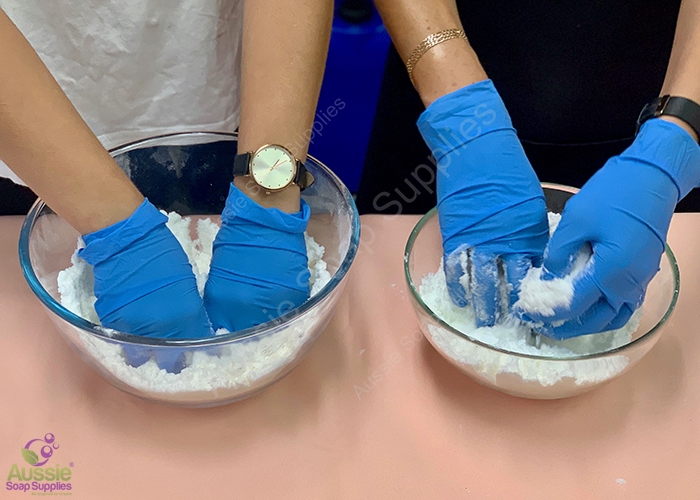 Bath Bombs Three:  Remember, we had two elves so if there is only one of you, don't divide the mixture!  Begin Spritzing the mixture with the atomiser. 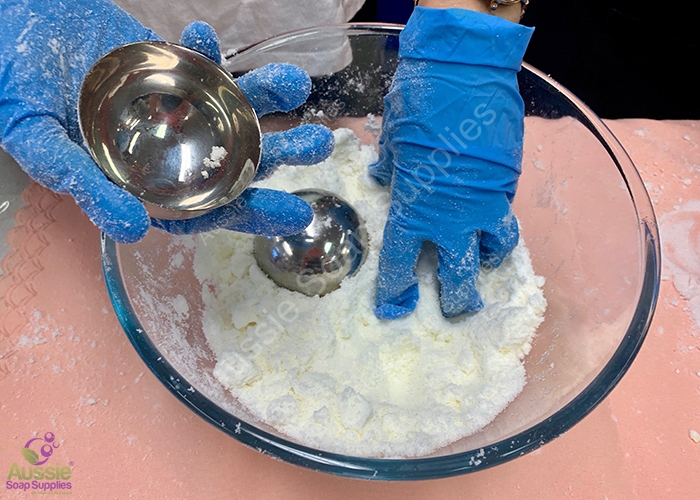 Bath Bombs Four:  Continue with mixing and spritzing and checking for consistency, as with the embed mixing.  You are looking to reach "wet sand" consistency. 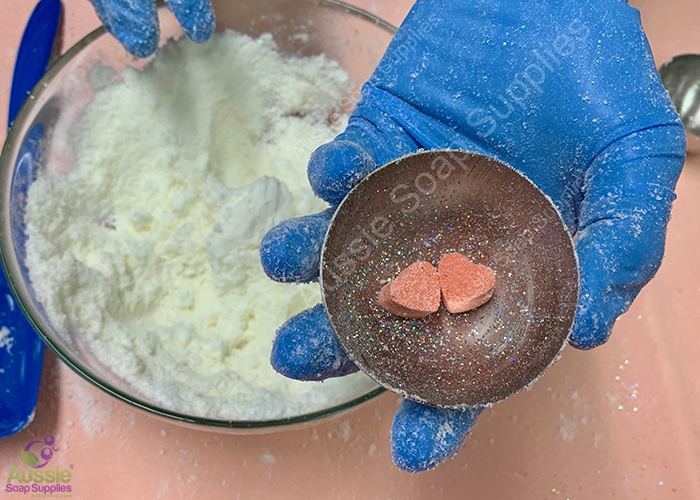 Bath Bombs Five:  Place your embeds and/or some glitter into one half of the mould 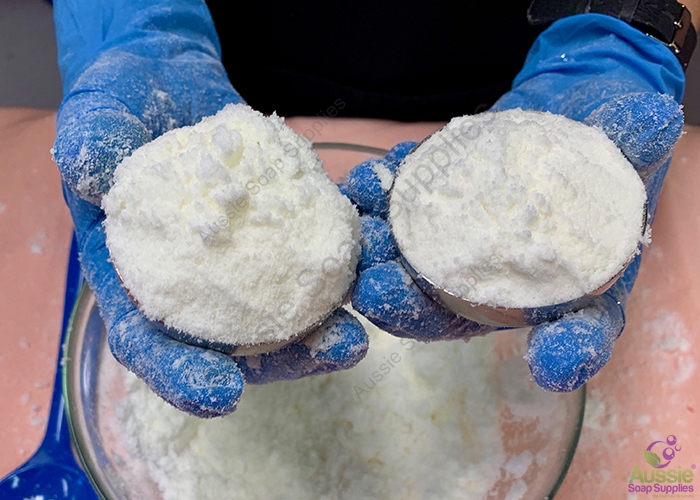 Bath Bombs Six:  Now fill both halves of the mould with a generous amount of mixture 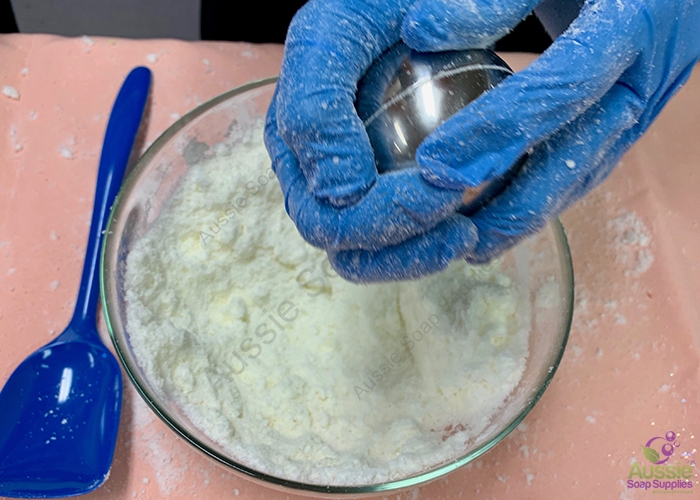 NB:  You need enough mixture to ensure when you press the two halves together they only just touch once the mixture is compressed. If they come together easily and you can feel the metal on metal, you need a little bit more mixture. 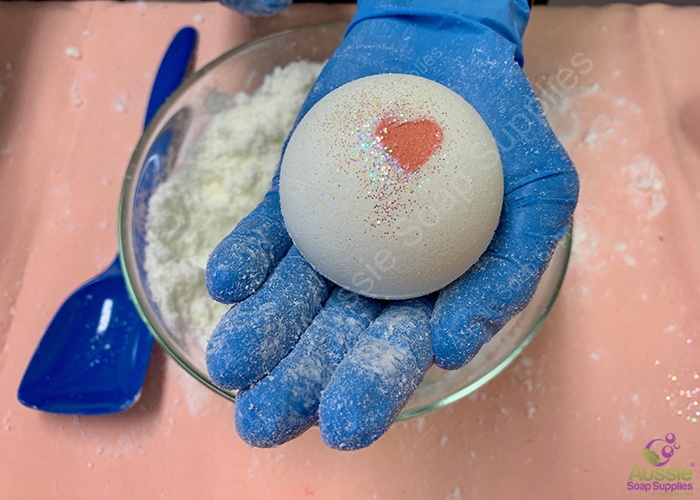 Bath Bombs Six:  If you have filled and pressed the mould halves together correctly, it's time to unmould.  We like to give one half of the mould a sharp tap with a mixing spoon, and then carefully twist a centimetre or so, as you lift one half of the mould away from the bomb so that you have just half sitting in the second mould.  Then repeat and carefully place the bomb on a lined tray to dry completely.

There are endless variations and configurations of embeds you can use in your Bath Bombs.
Below are pictured some of the other variations our elves made that day 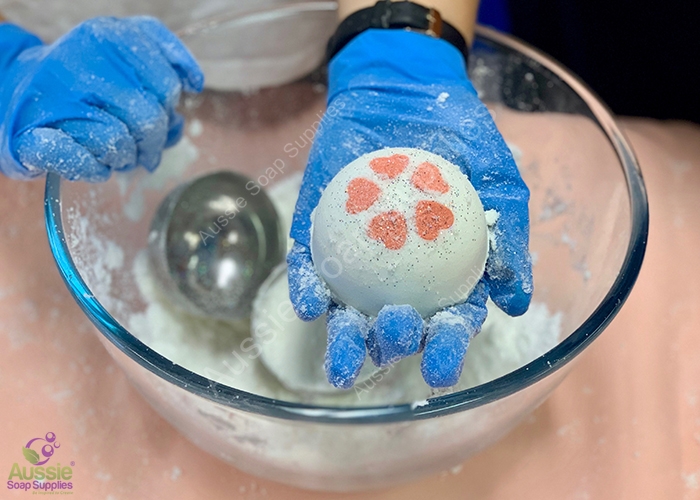 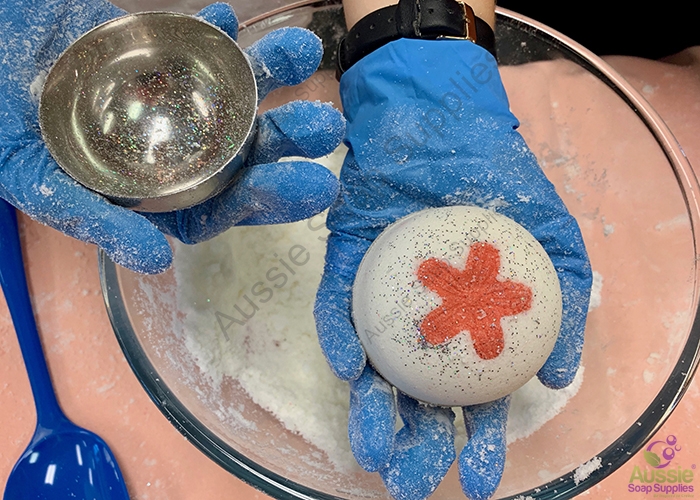 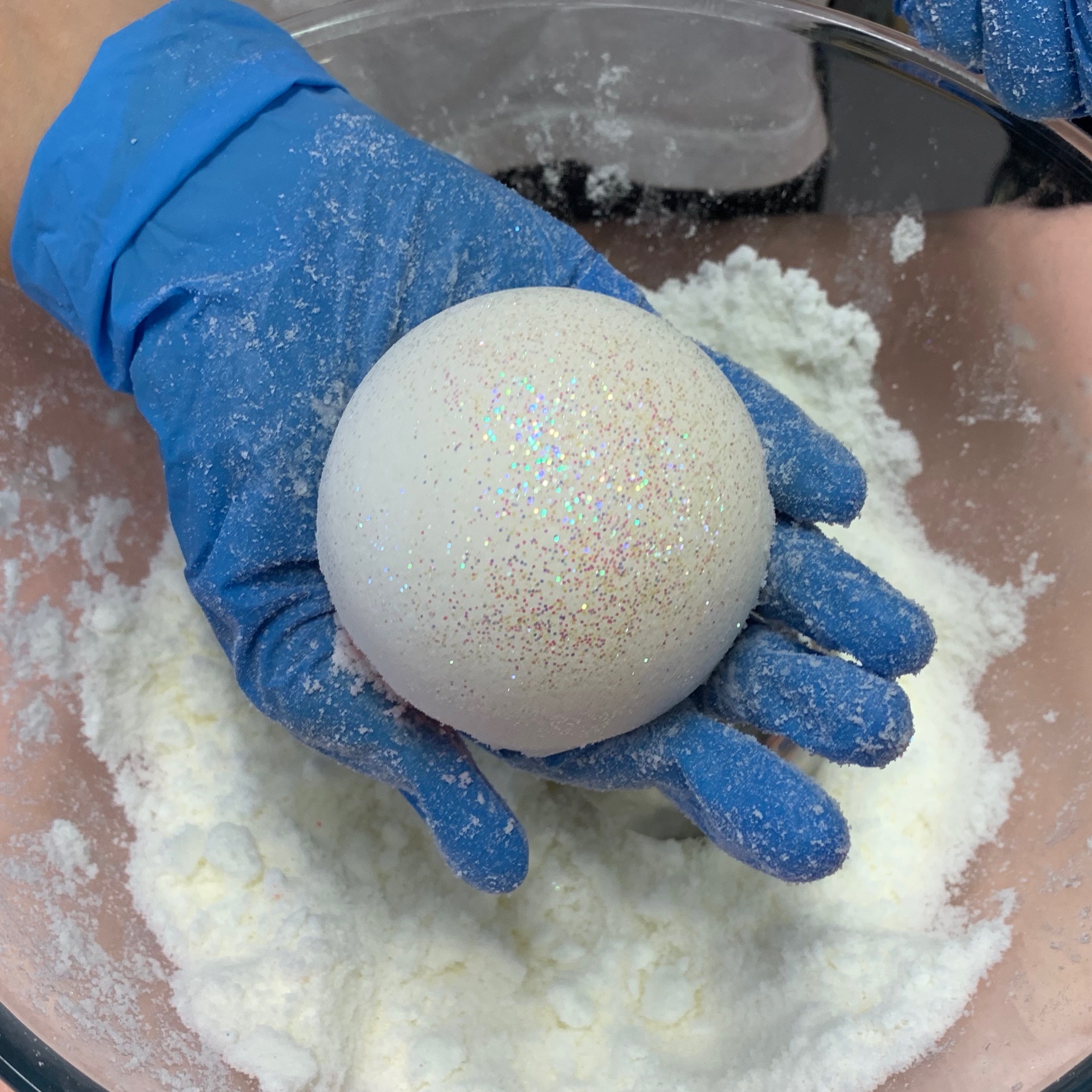 Or you might just prefer some glitter in your mould before making your bath bomb!

This unique two piece spherical plastic bath bomb mould is a mould and bath bomb packaging all in one!  Featuring a sleek and sturdy design, with…
Learn More

Anne-Marie, Founder of Bramble Berry Inc pictured at the Otion Store On this page are some Soap Queen Bath Bomb projects - 2 with video's and 2 with …
Learn More

Come home to Aussie Soap Supplies Happy Place Blend!  It is perfect for the transition from day to night. The combination of Cedarwood and Patcho…
Learn More

Our upgraded Deluxe Bath Bomb Kit now has more - making it easier for you to create your first Bath Fizzies. Making Fizzy Bath Bombs is great fun and …
Learn More

This unique two piece spherical plastic bath bomb mould is a mould and bath bomb packaging all in one!  Featuring a sleek and sturdy design, with…
Learn More

Together with Bicarbonate of Soda, Citric Acid forms the basis for all the fizzy bath products you want to make. Citric Acid is also used to balance t…
Learn More

Polysorbate 80 is an oil in water emulsifier, dispersant, and co-solubiliser. It is suitable for use in Blooming Bath Oils and room sprays and "easy w…
Learn More

Our Sweet Dreams Bath Fizzies are quick and easy to make and will have you drifting off into a blissful state in no time! In pretty tickled pink and s…
Learn More

Natrasorb Bath *Due around June due to COVID delays*

This is a totally natural starch product that is so useful as a fragrance carrier......Natrasorb Bath is able to absorb and carry large quantities of …
Learn More

This video tutorial is made by Dean of Sentinel Soap and Candles.  His recipe tutorial shows you exactly how to create his truly awesome Bat…
Learn More