When I sliced this log, I loved the Retro-Groovy design that was revealed as it is just a little bit sixties! This fresh, Avocado and Castor Oil Cold Process Soap is scented with Blackcurrant & Pomegranate Fragrance or you can use our Artisan Black Currant Fragrance which is delish too!  This fragrance does not discolour or accelerate trace greatly as long as you keep your temperatures fairly low (around 21 to 30°C) and avoid over tracing.
This Cold Process Soap uses a “slide column” or “faux funnel slide” technique, in which you slide the soap down the side of the column mould, measuring the pour by counting to achieve an even “funnel pour” of semi-concentric, but off set, rings of coloured soap.  As you fill the mould you decrease the time you pour the soap. 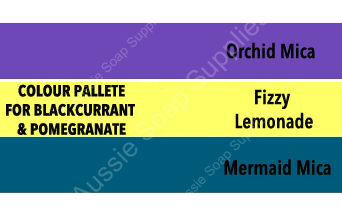 NOTE:  As I like to tap the mould on its seam (base end) to settle the soap and release any air bubbles, I use bulldog clips to ensure the side and base seal stays sealed.  The pail (bucket) allows the mould to lean on its side at an angle, thus enabling the slide pour to happen! 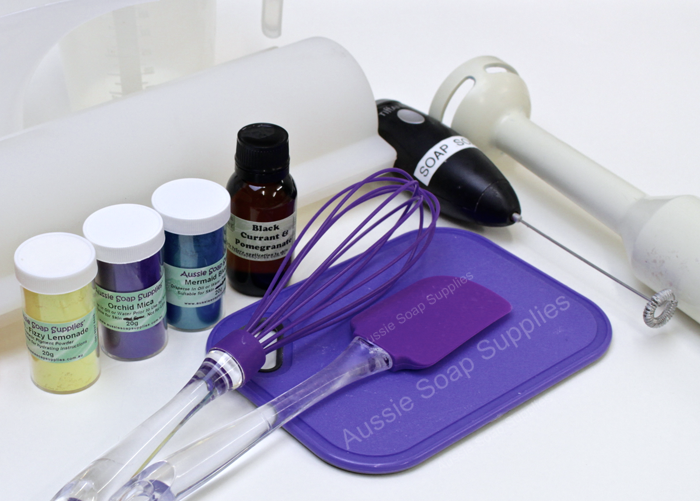 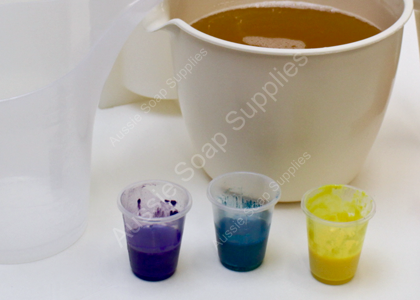 Begin preparing the soap as usual, don't forget to add the Sodium Lactate Plus to the lye water.
Check the temperature of the oils and lye water - it should be around 20 - 30°C.  (If you soap too hot you will have a thicker trace).
Now everything is ready to go! Bring the soap to a VERY light trace.
Divide the soap batter into the three jugs by weighing - place one of the jugs onto the scales and tare to zero.
Weigh 500 - 550g lightly traced soap per jug.  Repeat for the other two jugs. 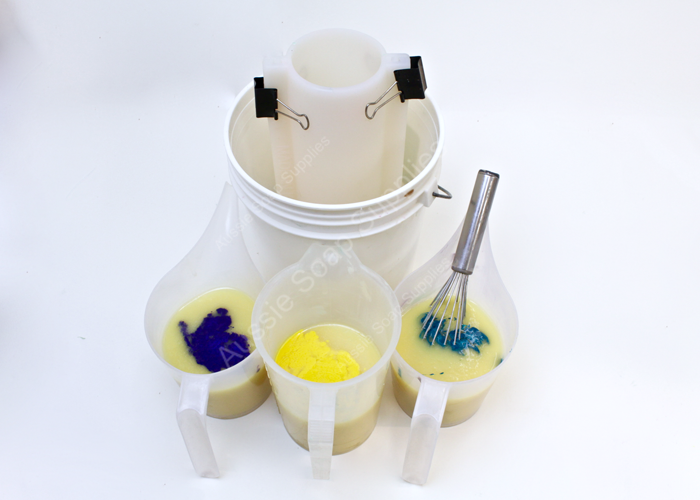 Now add the colourant to each jug – there is enough to make a nice dark colour, but if you prefer pastel, just use half the colourant quantity.
Mix this in manually, not with the stick blender.
Once the colourant is mixed in, add a third of the Fragrance to each jug and stir manually to combine. 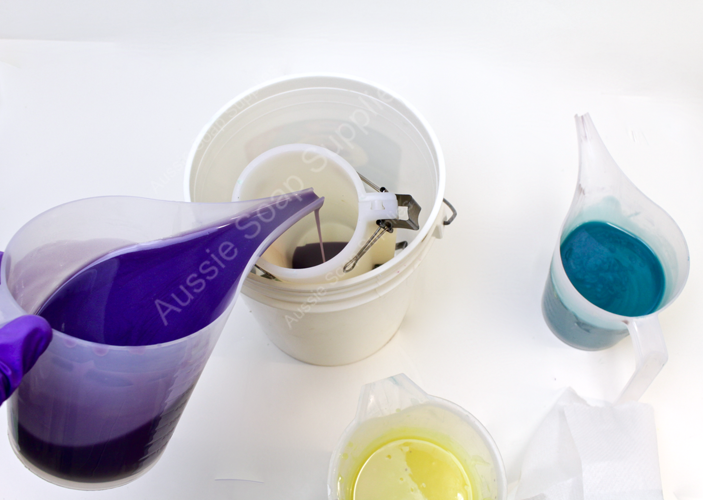 Decide what colour combination you like and then line the jugs up in a row, mine were purple, then teal and then yellow.
Now begin pouring the Orchid colour soap first, as you slowly pour, count to five – this is the measure to ensure even portions. 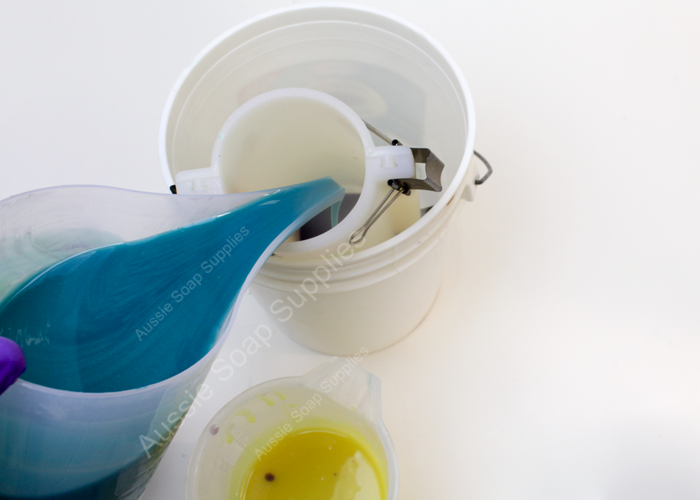 Now pour the Mermaid colour to the count of five. 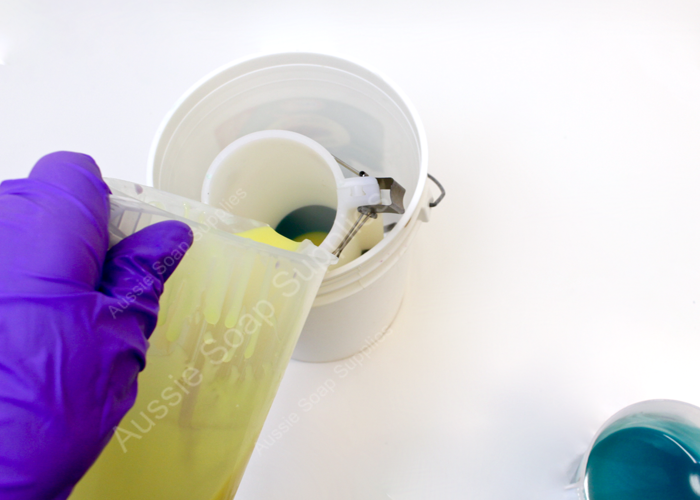 Now pour the Fizzy Lemonade colour to the count of five.
After this the column mould will be two thirds full and it’s time to adjust the angle of the mould and pour the last layers. 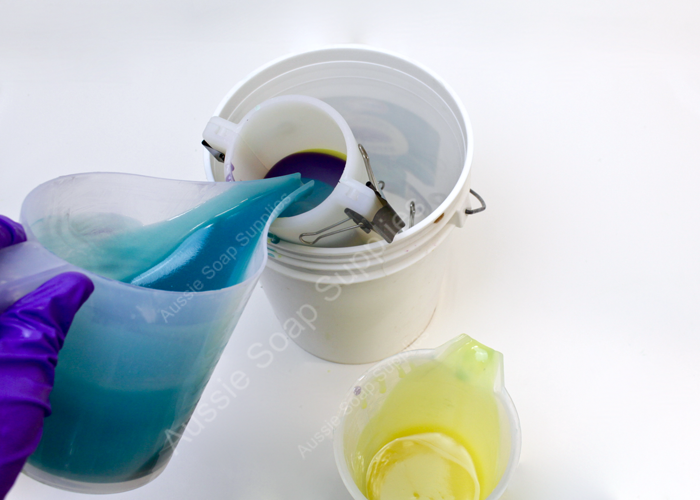 Manually stir each of the jugs to loosen the soap as it may be starting to thicken a little.
Begin pouring again with Orchid soap, this time with a count of three.
Adjust the angle of the mould a little so that it is more upright.
After this repeat the other two colours pouring to the count of three.
After this the column mould will be nearly full and needs to be vertical.
Top up the colours as required to within 1 cm of the rim of the mould 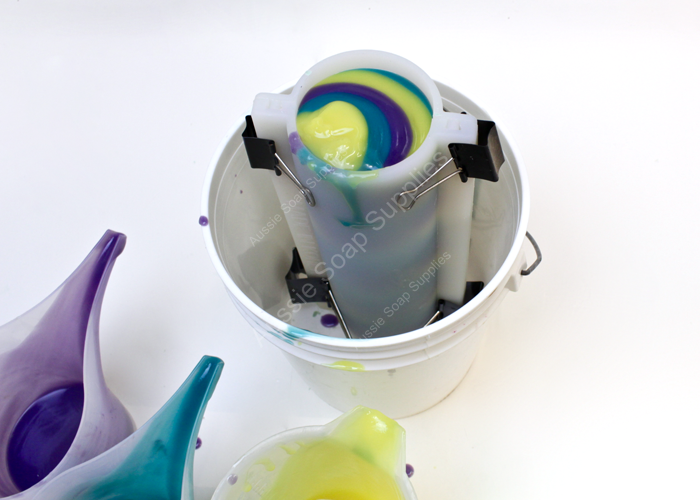 I give the mould a GENTLE tap to settle the soap if needed and then it's time to put it to bed!
Insulate the soap using your usual method and encourage gel.
At this time I combine all my left over colours and pour into individual moulds - I made 4 soaps with the left overs.
After the temperature of the soap has returned to room temperature set aside for a couple of weeks to dry out a little and firm up. 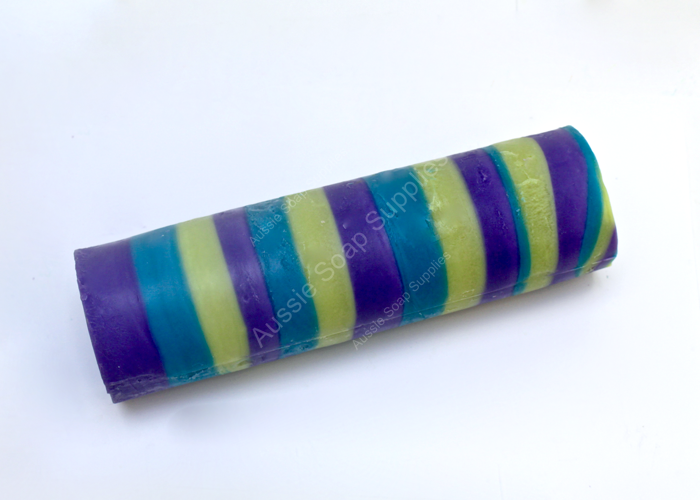 As you can see from my log I was too impatient!  Because the silicone mould does not allow evaporation
through the sides the soap takes longer until it's ready to unmould.
If you unmould too early as I did, it's a little rustic in places.
Once it is firmer unmould and slice to reveal the groovy, retro semi-concentric circle design. 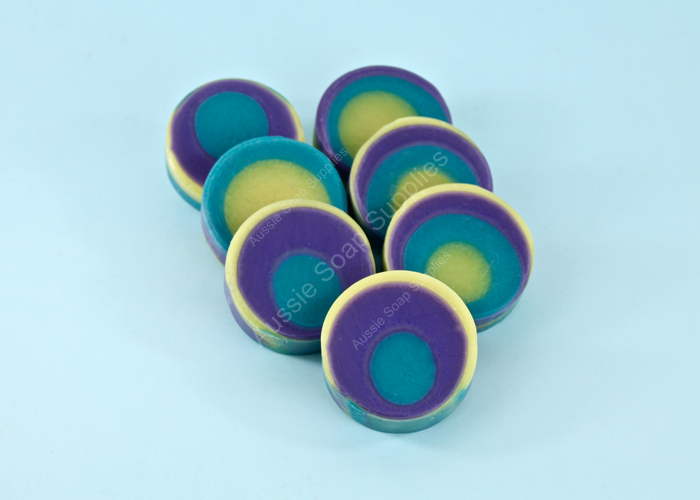 Allow 6 weeks to finish curing before use. 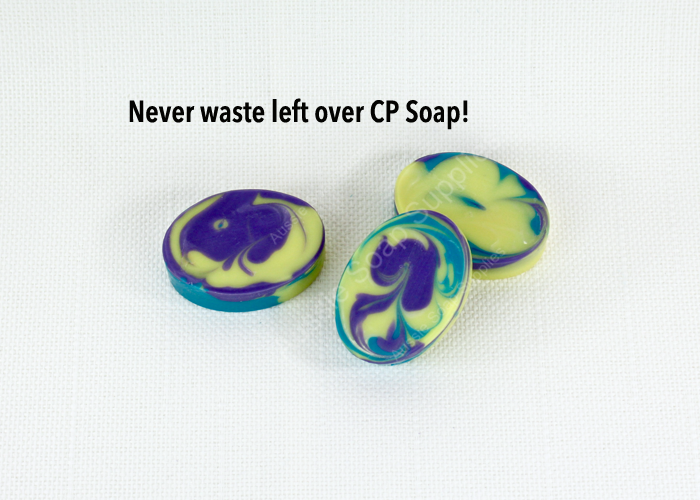 You need to purchase Distilled Water, Olive Oil and Sodium Hydroxide separately.
Second mould for leftover soap not included in trolley items.
There will be left over ingredients in varying amounts for another project

This is one of early 'tried and true' recipes from our teaching workshops.  We keep this on the site as it is so popular still!&nb
Learn More

Like sunshine!  This two-colour column swirl is vibrant in scent and colour!  It is scented w
Learn More

Save that Soap!  When the "soap fairies" visit, the best laid plans can go awry!  I had everything planned for a time consuming, intricately…
Learn More

This is David's second infinity swirl project using the Sectioning Tool in the Silicone Loaf mould.  If you want to turn this to palm free, just …
Learn More